The day began with the sun still tucked up in bed, a fact which would make the cycle through London just that little bit more interesting. We boarded the 6:15 train to Kings Cross still half asleep, but excited about the day ahead none the less, wondering how many people would turn up for the ride, who on Earth RLR were, and most importantly, how many free Tribe bars we would get! On the train journey Kaitlynn swapped out the stock saddle on her bike for a better one, which she would then carry all the way back to Cambridge!

Upon arrival at Kings Cross it became apparent that none of us had any idea which way the meeting point for the ride was, but isn’t that what touring is about? Anyway, with the fear of losing 3 cyclists in the Big Smoke I lead us off with directions from my little Garmin. Even at 7’0’clock in the morning the London traffic was in full effect. After about 10 minutes of stop-start traffic lights we dropped onto the bike path alongside Regents Canal, passing two men meeting under the cover of darkness for perhaps non-legitimate business exchanges. The canal path was nice, apart from the fear of stacking it into the canal, it was so calm it was hard to believe we were in the middle of London. Off the canal path now we passed shopkeepers putting up their stall on what I later found out to be Broadway Market. We arrived at E5 Bakehouse 20 minutes before the meeting time to be greeted by the smell of coffee and freshly baked bread. Some baked goods and coffee later the first people started to arrive for the ride, before the moment we had all been waiting for arrived, that’s right, FREE BARS! 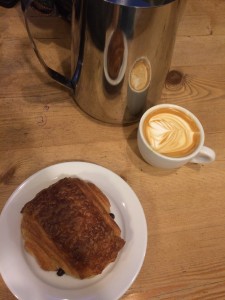 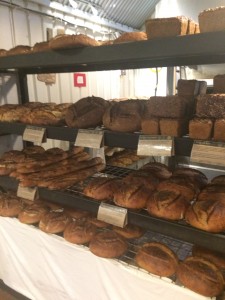 Have you ever seen a happier cyclist? 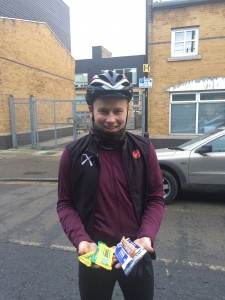 Everyone before departure: (photo credits to Brother Cycles) 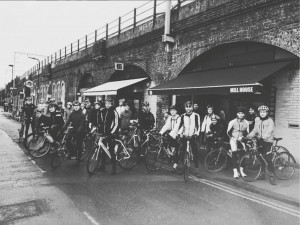 After everyone had stuffed their pockets with as many Tribe bars as possible, a group of about 30 of us rolled off to start the journey back towards Cambridge, lead by some of the creators of Brother, Tribe, and Right Leg Rolled. The distinct lack of mudguards in the group became immediately apparent as the brown build up of dirt on London’s roads was soon sprayed across our faces. Once leaving London we were soon onto the first (and only) noticeable climb of the day around Epping Forest, after that the route was nicely rolling all the way to the café stop, with only a minor spattering of rain which helped wash some of the mud off our faces at least.

Going to try my hand at some food blogging now: Let’s start with the Wild Apricot & Lucuma Bar, (apparently the lúcuma is a subtropical fruit native to the Andean valleys, who knew?), I’m not a big fan of apricots myself but I found this quite tasty, not sure what that says about the flavouring but still. Quite dense to eat whilst riding although this was meant to be eaten 45 mins before exercise so not an ideal test. 7/10. Next was the Bogoya Banana Bar, actually made for recovery and I must confess I ate this mid-ride, well I ate half before I hit a pothole and dropped it. A real shame because this bar tasted great; 9/10. And so concludes my food blogging, tune in next time for more sub-par reviews.

Kaitlynn and her spare saddle at the café stop: 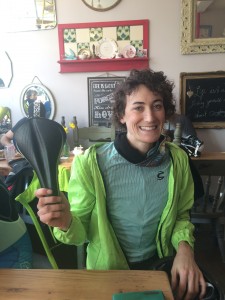 After a lovely café stop we were back on the road. Maybe it was the Tribe bars, or perhaps someone spiked our cake, but the pace had definitely lifted. As we were drawing closer to Cambridge there were a few attacks off the front, and as we reached more familiar roads the pace creeped up and we decided to hit the front, not to be outdone. CUCC leading everyone back: 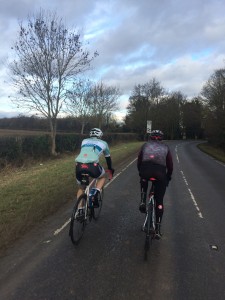 In good company we rolled into Cambridge and headed for our destination of Espresso Library looking like walking Jackson Pollock paintings in shades of brown. And so ended a great day of riding, big thanks to Brother, Tribe and Right Leg Rolled for organising it! 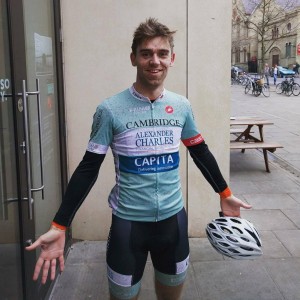