This weekend Oxford hosted the BUCS 25 mile Time Trial, which is also used as the Varsity Match between our two Universities. A strong Cambridge contingent (Over 10% of the startsheet) turned up, with 12 Men and 4 women ready to compete along the course just outside Cumnor. 5 of our riders had never taken part in a 25, and with a fast course on the cards, we were expecting a lot of new PBs, and after dominating both the 10 and TTT, were confident for another good set of results.

First off the line for us was Charles Butler posting a 56:57, a really impressive time considering it was his first ever 25 miler and was his standard road bike with just clip on bars. Next back was John Grenfell-Shaw (Trinity) with a 52:52, enough to get a top 20 placing by the end of the day. Club president Jess Atkinson (Churchill) then posted a rapid 57:38 in her final ever BUCS event, which stood as the quickest Women’s time for almost two hours, with only two other riders going quicker on the day. Carrie Bedingfield was our next rider off in the women’s event, riding a 1:01:55. Back in the Men’s event, Matt Bond (Fitz) and Rob Clucas (Fitz), both riding in their first 25, posted 1:00:18 and 56:00. The time to beat by this point was 51:30, with our quartet of Ali Golby (Jesus), Felix Barker (Tit Hall), Jack Brown (Caius) and John Mulvey (St Edmund’s) up next, we were confident of breaking this mark. After some storming rides at the 10 and TTT, Ali rode a 51:40, not quite managing the power mark he’d paced himself to. Then came Felix (the 2015 Champion) coming in under 50 minutes (just) with a 49:56 (and also PB) becoming the leader so far. Jack came in with a 51:05, in his 2nd ever 25 mile TT, PBing by almost 15 minutes. However, reigning champion John Mulvey came through next with a massive 49:30, knocking Felix out of the top spot. Toby Cowell (Catz) came through quickly after John, riding a quick 53:11 on his wonderfully retro bike. After puncturing in last years event, Nick Grogan (Trinity) posted a time of 1:00:00 exactly, so close to getting under the hour! A battered and bruised Rob Walker came through in 51:30, a fantastic ride considering he’d had a brief stay in Minor injuries earlier in the week. Our final Men’s representative was Alex Petter (Magdalene), also riding in his first event, coming home in 1:00:55. All attention now came to our final two women, Emilie Lostis and Imogen Grant (Trinity). With the Women’s Varisty riding on 3 of our 4 women, we were waiting with bated breath to see if we’d done enough to beat the Oxford Women. Emilie came in with a 1:03:05, and fresh from winning the Women’s boat race, Imogen a 1:01:20. Despite an amazing ride from Jess to take the individual Bronze, an impressive ride from Oxford led to 4 of their women going under the hour, taking the Varsity title back again with them. However, only 12 seconds was in it for the BUCS podium, with Oxford again coming in ahead of our two best placed riders (Jess and Imogen in 1:58:58).

The first 3 Cambridge riders in the Varsity get half blues, meaning Jess will receive her 2nd in a row, Carrie her first and Imogen her first in cycling (to go with the full from Rowing).

The Men’s team again demonstrated that Cambridge remain to be the dominant force in time trialling, taking the win (John Mulvey successfully defending his title) and 3rd (Felix Barker) with two more riders in the top 10 (Jack Brown in 8th and Rob Walker in joint 9th). This meant another team gold (7th in a row at TT events) with a new BUCS and University Record of 2:30:31 (Mulvey, Barker, Brown). Further demonstrating our strength in depth, the Cambridge B team (Walker, Golby, Grenfall-Shaw) took second team on the day in 2:36:02. Unfortunately, due to BUCS rules, they weren’t allowed to collect the silver medal. With the times collated and Oxford only being able to post a 2:38:15, meant that we won the Varsity by a margin of 7:44, with our Men’s B’s beating Oxford A’s for yet another year. 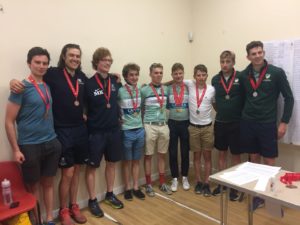 The first team of 3 will receive half blues with the chance to convert them to full later in the year. John Mulvey receives his for the 3rd year running, with Felix getting his for the 2nd time and Jack his first.