An incredibly strong Cambridge team headed to Hadleigh Park on the 25th of February 2018 for the annual Varsity Mtb contest. The race was held as part of the Mud, Sweat and Gears XC series and resulted in a dominating victory for Cambridge in both the women’s and men’s races. We’ll hand over to our roving reporter (and Varsity competitor) Tom Wade for a full breakdown of the race (with thanks to Robbie Blythe’s dad for photographs):

“Despite the freezing temperature and strong, blustery winds, the Cambridge Mountain Bike Varsity team arrived in good spirits at the ex-Olympic venue of Hadleigh Park in Essex. These spirits were no doubt aided by the news that Oxford had a very depleted team. There would be twenty-one Light Blue jerseys tackling the track, but Oxford could only muster five entries, making a Light Blue victory a likely prospect. 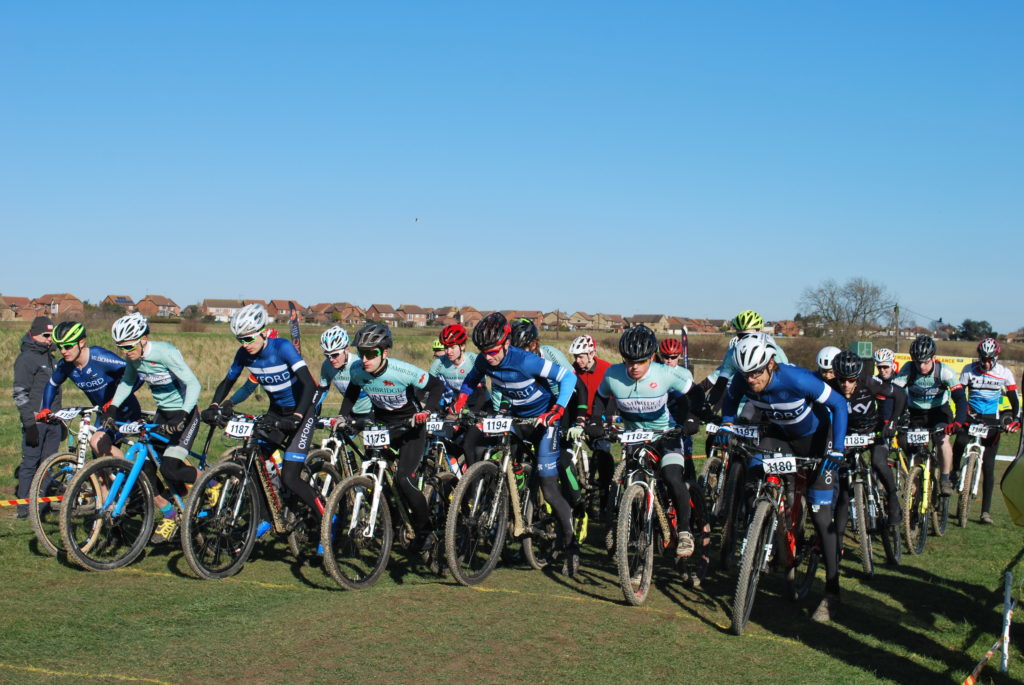 The racing began, after both teams had a practice lap to assess the conditions. The men’s race involved 6 laps of the track in a race lasting approximately 1.5 hours, whereas the women did 4 circuits. As soon as the whistle blew, Cambridge’s trio of Tom Simpson, Rob Walker and Will Weatherill, accompanied by Oxford’s Oliver Bent, immediately established themselves as the main contenders at the front of the pack. 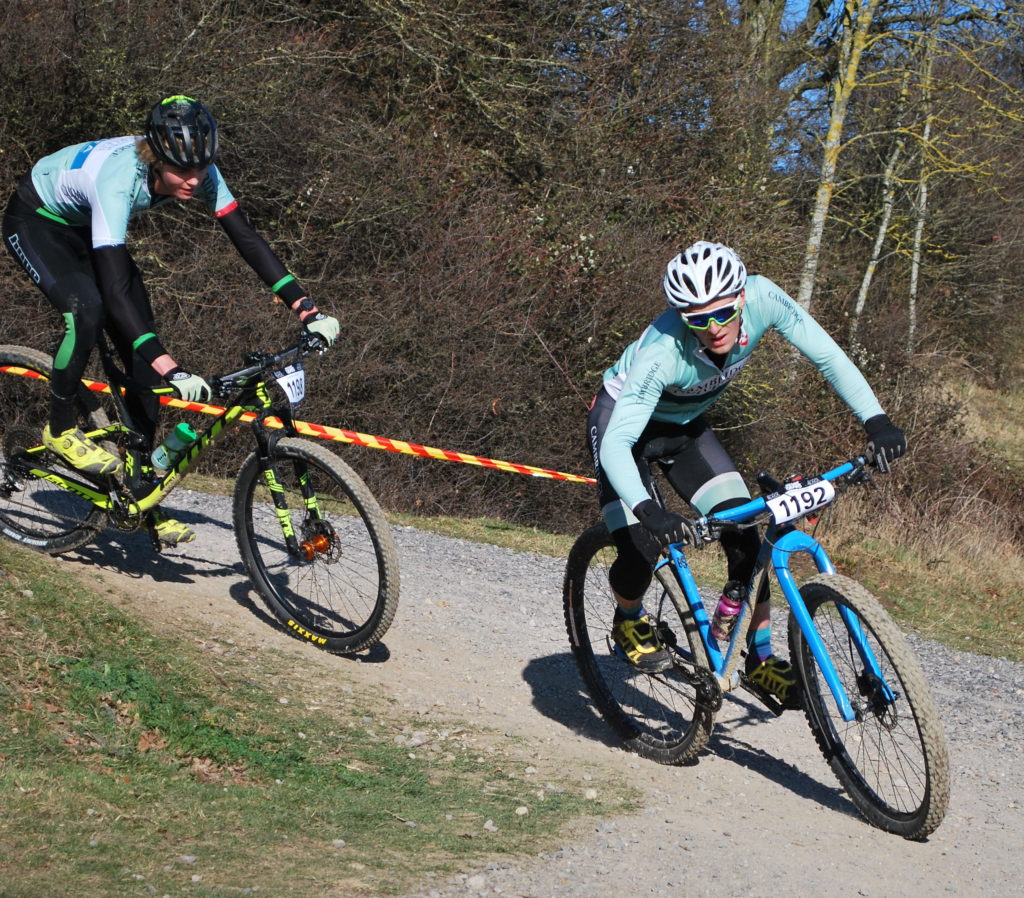 Will Weatherill chases down Tom Simpson – “You’re supposed to be racing!”

Meanwhile in the chaos of the mass start, Oxford’s Hugo Underhill ventured slightly off the racing line and unluckily hit a sharp flint which sliced his front wheel open. His tyre instantly deflated and the subsequent half-hour repair was a misfortune that Oxford could ill afford. As the Varsity Winner would be determined by the aggregate of each team’s fastest three times, this crash severely hampered Oxford’s challenge. 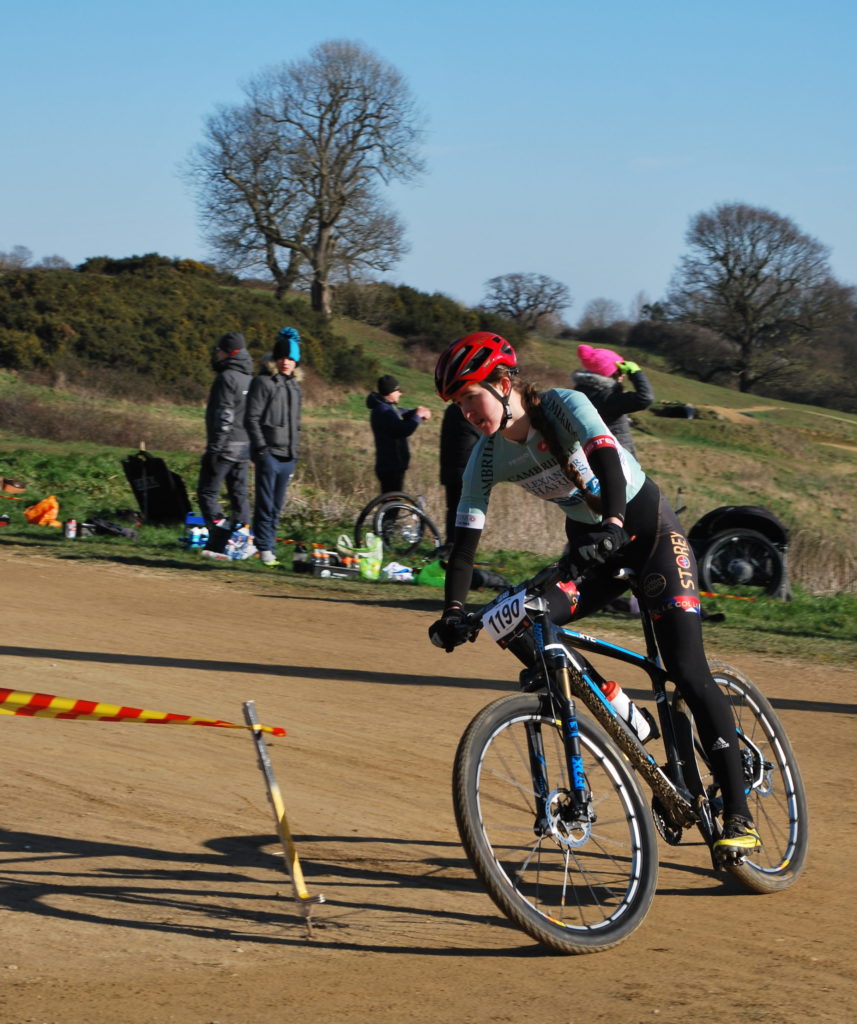 Ffion James claimed the fastest lap time of any woman in the event. Ffion’s times would have given her an easy win in the Expert/Elite Women’s category.

If Oxford had any hope left, it was dashed when 5th-placed Bryn Davies dropped out of the race on the second lap with a terminal mechanical issue. During the Olympics in 2012, the professionals had made this course look easy, but this was not the case for the Varsity rider as those who remained tackled the steep uphills and switchback descents, constantly impeded by the high winds. Despite the hard work and through the roof heart rates, many of the Varsity riders were struggling with freezing cold hands as they began to catch and overtake the slower veteran and sport racers.

When the riders passed the halfway point the Cambridge supporters were in full voice, not only cheering on the Light Blues from trackside but also athletes from other categories. By this stage, Toby Cowell and Elliot Scott of Cambridge had both been forced to retire, but at the head of the field Walker’s relentlessly fast laps had earned him a healthy 90-second buffer. Further back, Weatherill and Simpson were still battling over second place. 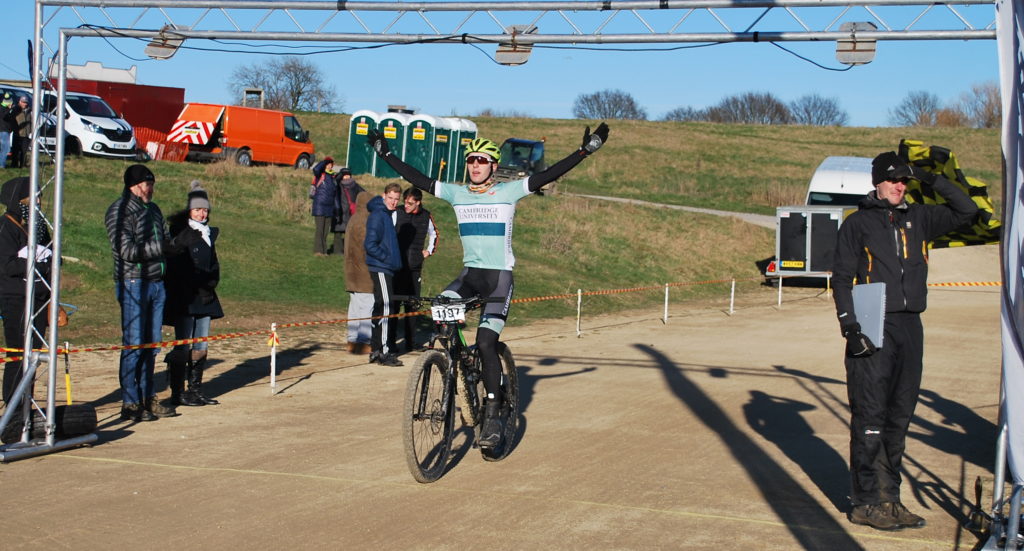 A triumphant Rob Walker leads out the Cambridge victory

In the end, Walker was the runaway winner, opening up a 4-minute gap to Weatherill in second. Unfortunately Simpson tired and Oxford’s Bent dug deep to make a last-lap pass and take the bronze medal position, beating Simpson by less than 30 seconds. Cambridge filled out the next 5 positions with Felix Barker, Finn Allen, Robert Clucas, Max Vesty and Ieuan Best respectively, and Oxford’s Angus completed the top 10.

In the women’s race, it was no surprise that Cambridge’s National Champion Ffion James was putting in a sterling performance at the head of the field, finishing in what would have been 5th place, if she had been competing in the men’s race. Oxford’s Tamara Davenne was, to her credit, only 12 minutes adrift in second place and the Light Blues’ Jess Atkinson took the final podium spot.

After a poor showing, Oxford are likely to find a closer venue and more competitors for next year’s encounter, but for the moment it is Cambridge who are the Mountain Bike Varsity Champions.” 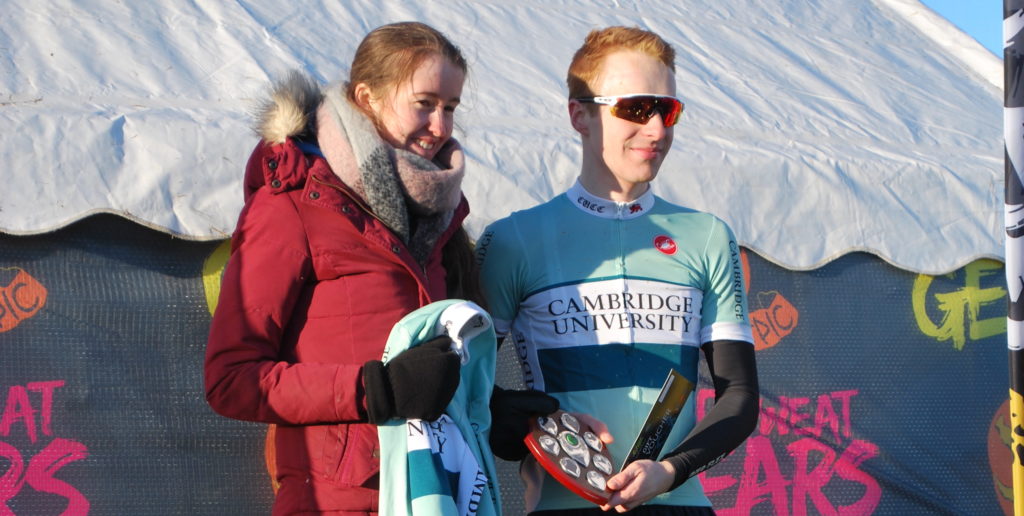 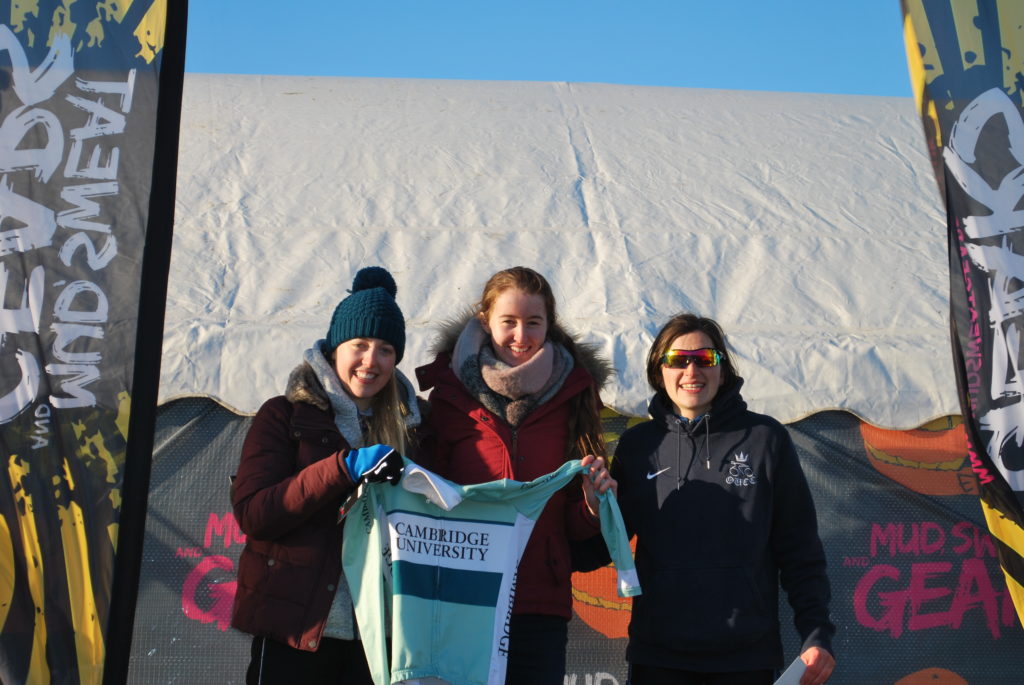 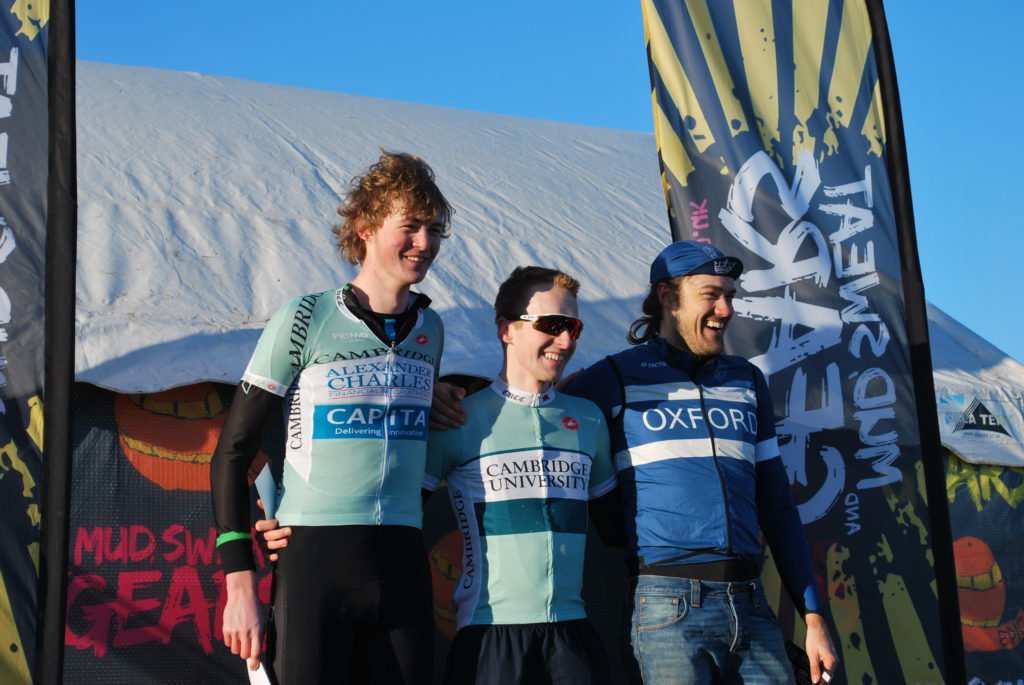