For the past two years, I was aware of (at most) five other women that cycled in Cambridge. Coming into my third year, I reluctantly agreed to take on the role of women’s captain for fear of the role becoming redundant otherwise. Now, after eight weeks of term, I am extremely pleased to say that our women’s mailing list is 54 strong (and still growing), and I have led weekly rides of up to 14 women (yes, we beat the men). So, here’s how it all happened in under 8 weeks…

Michaelmas Weeks 1-2
Having received multiple emails from women interested in joining CUCC over summer and through into the start of term, I decided it would be a good idea to set up a CUCC women’s mailing list. I was expecting maybe 15 or so women to sign up, but before long there were over 30 and it continued to grow! A lot of girls seemed to be new to cycling and were nervous about going out on group rides and cycling to places they’d never been before – plus, riding with the men can be somewhat intimidating! So, I then decided to lead a women’s ride that Sunday and meet some of the girls in person. Five ladies turned up, which I was really pleased with, and I had multiple messages from others saying that they wanted to come on future rides. 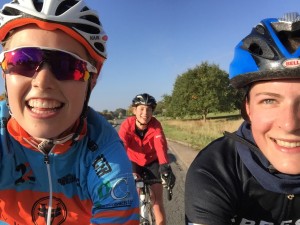 Michaelmas Weeks 3-5
Our first social of term was held at Espresso Library – just a relaxed chat and (delicious) hot chocolate, and a chance for us to get to know each other without any lycra in sight! It was also an opportunity for me to gauge what was wanted from the women’s side of the club, and get feedback on how it was going so far. Meanwhile, I continued to lead women’s rides on Sundays, and numbers were growing week on week until we hit 14 women on the Sunday of week five – this was frankly bananas! 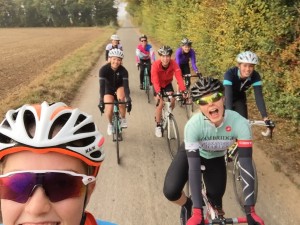 The Shorts Were Still Out At The Start Of Term! 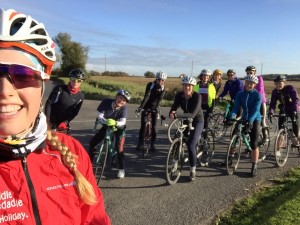 We Braved the Headwind Home (Unlike The Boys). 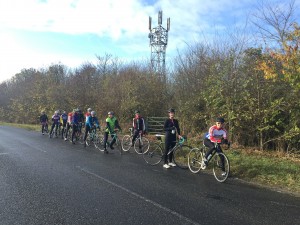 14 Women – The Biggest Ride All Term!

Michaelmas Weeks 6-8
Corpus hosted a CUCC formal in week six, and I was very surprised and pleased to see such a strong turn out of women (8 out of a total of 26)! 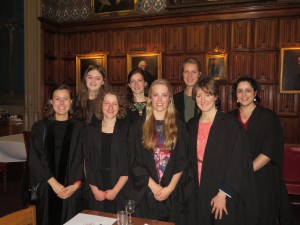 The CUCC Corpus Formal Had A Strong Women’s Turnout!

The following week, I hosted a CUCC Women’s formal at Churchill and 15 (yes, 15!!) women made it. I think the boys were getting jealous at this point, which can only be a good thing. 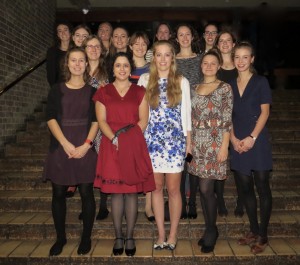 The weather went from chilly to absolutely freezing towards the end of November. On the previous weekend, the temperature averaged 1 degree for our entire three hour ride, and there were girls there wearing shorts and short fingered gloves!! I realised that a lot of newbies to the sport didn’t really know where to look for kit, or what kind of kit to get for the winter. I sent out an email with a huge list of my winter kit essentials and top tips, and on the next ride there were overshoes, headbands and long fingered gloves everywhere! There was no stopping us now – the women’s rides continued in the bitter cold and occasional rain right through to the end of term! 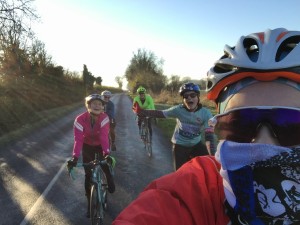 Zero Degrees (For 3 Hours) Doesn’t Put Us Ladies Off! 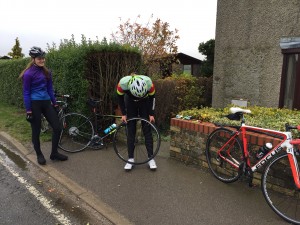 Ladies Can Fix Punctures Too (in under 15 minutes)

As interest was still increasing, and days of term were running out, I decided to lead two mid week rides in week 8. The first was a 1.5 hour loop over Chapel Hill and back on Tuesday afternoon, and the second was an hour long loop at 8am on the Friday (back in time for 10am lectures). The idea of these is to make them a standard weekly thing, with the same route every week so that everyone gets to know the routes and a ‘ride leader’ isn’t necessary. As a trial run at the end of term, I think they were a success and I’ll be looking to make these a weekly occurence in Lent Term! 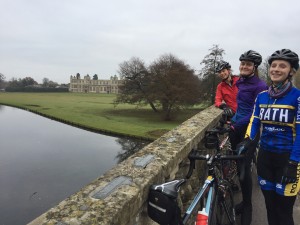 Audley End House is Definitely Going To Be A Regular Easter Term Destination!

All in all, I think this term has been fantastic for the women’s side of CUCC. I have been blown away by how much it has grown, and how much interest and positive feedback I have received. I’d like to say a massive thank you to all of you women who have supported and contributed to its development this term, I have loved being a part of it! I have no doubts that the club will continue to grow next term, and I have plans to make the boys even more jealous of the women’s side of the club!