After missing last year’s event in Stirling (lovely spot, a very long way from Cambridge), CUCC were back with a strong presence in 2017. The race was held on October 28th on Pea Royd Lane in Stocksbridge near Sheffield, a steep sub-3 minute climb that was used (in a 400m longer format) for the 2014 Nationals. The women were first up, with President Jess Atkinson coming in 14th and Carrie Bedingfield following in 17th in a competitive field. Felix Barker (8th), Seb Dickson (13th) and Rob Walker (17th) made up the Cambridge men’s team who placed second on the day, while Tom Simpson had their backs in 18th. Toby Cowell was 36th, Luke Fisher 59th, fresher Jack Brown managed 70th despite having his start botched and Seán Irving was 83rd. Full results can be found below.

END_OF_DOCUMENT_TOKEN_TO_BE_REPLACED

On Saturday the 9th April it was the BUCS 10 Mile Time Trial Championships, held just outside Oxford. The format of the racing, a time trial, sees each competitor try and lay down the fastest time they can around the 10 mile course. On top of this, the Team medals would be awarded on the combined times of the fastest 3 from each University.

In the Men’s Competition 48 Universities were represented and 7 Cambridge riders qualified – fewer than the year before. The Women had 4 qualify for their event, but bad luck (and shoulder dislocations!) lead to just 2 taking the start. With only one rider seeded, both men and women were regarded as outsiders for the titles- one person from a Scottish University even forecasting that Cambridge ‘would go off a bit of a cliff’ this year and stood no chance- laying down a bit of a challenge! 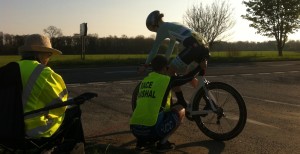 With one rider put off every minute it would be 3 hours before all the times were in, making for an anxious wait to see how riders compared. Soon, however, it began to show that the Cambridge Men were doing pretty well! The fastest time crawled slowly downwards throughout the course of the afternoon, until it came to a halt with Cambridge’s Oliver Mytton setting a new fastest time of 20:23 with 110 people still to go. This ended up standing unchallenged for over half an hour- despite some seeded people coming and going, the person coming closest was Fresher Ali Golby, 9 seconds back in his first showing for Cambridge. END_OF_DOCUMENT_TOKEN_TO_BE_REPLACED

Despite the promised wet weather, several members enjoyed warm and dry conditions on the E1/25b on Sunday, promoted by Lea Valley CC. A quick glance through the start sheet showed a large Oxford contingent entered, and since public urination is frowned upon a strong showing was needed to mark our territory.

The gently rolling 25 mile course along single carriageway unfortunately starts at the south end, but a short train ride brought us to the HQ at Lea Valley CC’s cycling hut: a taste of the cycling club scene of the ‘50s. END_OF_DOCUMENT_TOKEN_TO_BE_REPLACED

On the 4th March, 57 cyclists and 1 unicyclist lined up to see just which is the best college at Cycling.(perhaps surprisingly, it isn’t Girton) With some very fast times laid down already in the season so far by people new and old, it was going to be an interesting race! END_OF_DOCUMENT_TOKEN_TO_BE_REPLACED 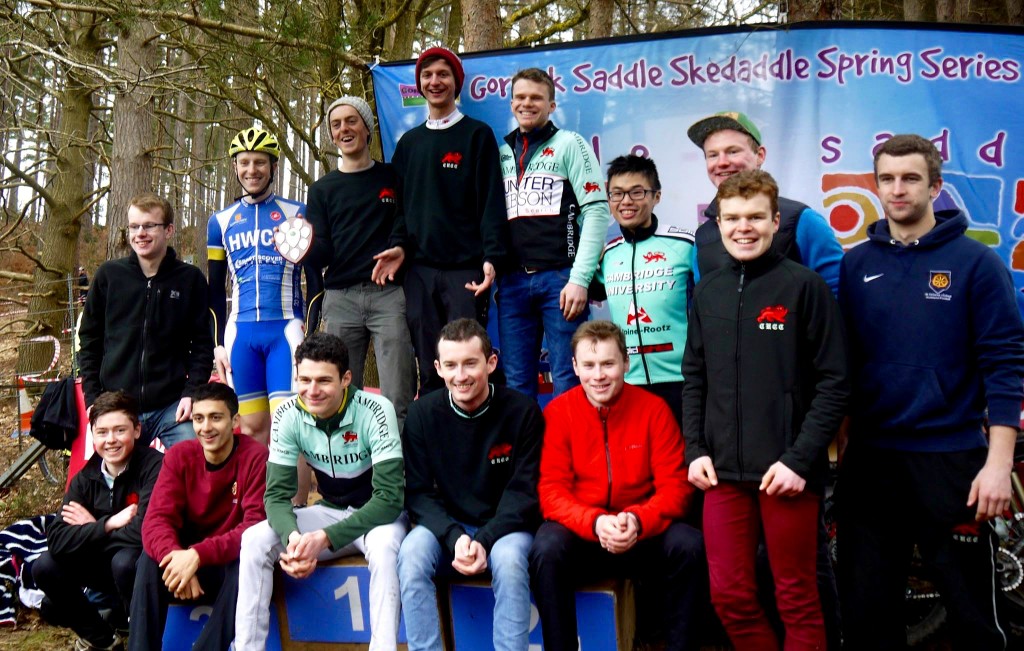 The 2017 edition of Varsity XC took off with another early morning. We gathered in Catz car park in the dark to pile eleven bikes into the back of our hired transporter and arrange ourselves between the three additional cars. To everyone’s surprise, Official Supporter Jali Packer put in a heroic effort to make it to Catz for 6:15 am after his Women’s Varsity Netball Dinner the night before, pillow still in hand. Once at Crowthorne Woods in Berkshire, the venue once again, we met with Rob Walker and Tom Wade – making the Cambridge team up to a huge fourteen men and three women! END_OF_DOCUMENT_TOKEN_TO_BE_REPLACED

Ed Lee-Six, Hal Bradbury, Seb Dickson and myself showed our lack of knobbly-tyred inclinations and on the same date as the Varsity MTB race headed down to north London to ride the early season classic that is the North Road Hardriders.

Whilst the weather was kind this year, road works meant the hilly course was shortened to 22 miles. Seb placed 6th in 53.15, 2 mins down on winner Lloyd Chapman, with Hal 8th, myself 10th and Ed in 42nd. CUCC missed out on the team prize only because someone (cough Seb cough)  is not racing in light blue colours, so an encouraging result considering so many of us were away racing against Oxford. 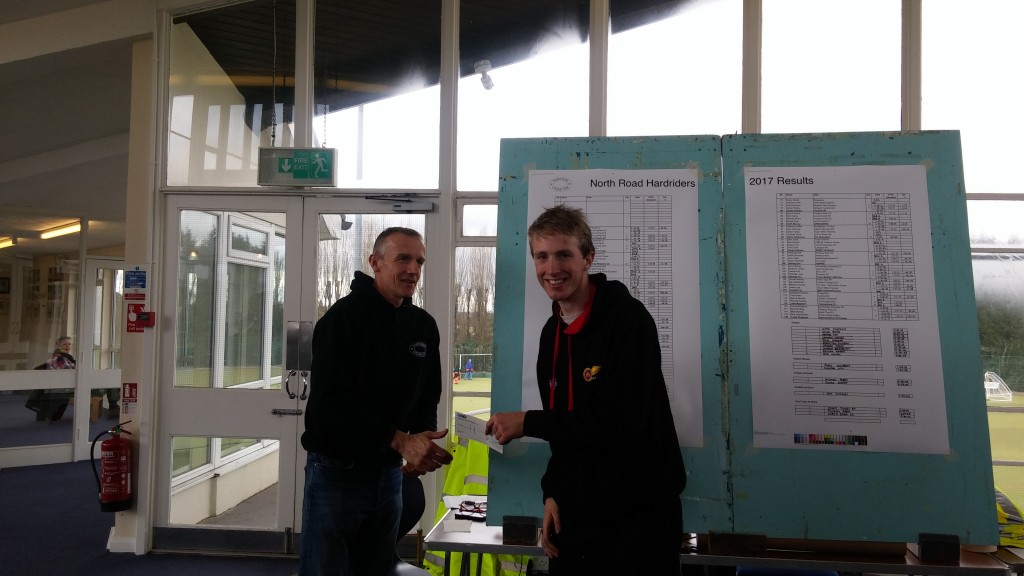 Seb Receives his cheque for £50

The cold weather, strong breeze and wet conditions meant that no super quick times would be posted, and many decided that the aero gains of a skinsuit and carbon wheels would be better traded for some warmer clothes and effective braking! END_OF_DOCUMENT_TOKEN_TO_BE_REPLACED

For the last two weekends running Toby and I have been heading down to Hog Hill to work on our crit racing skillz in the Cat 4 only Saturday race series. The ‘chopperfest’ description is unwarranted, although both our crashes at training camp have landed us firmly in the chopper camp (I’m speaking on your behalf here, Toby). Anyway, to simplify our report we decided to split it into a nice and simple ‘what went well’ and ‘what we can do better’. So here goes: END_OF_DOCUMENT_TOKEN_TO_BE_REPLACED

On the weekend of 19th/20th November a small group of us took the excuse of BUCS track Championships to take a trip to the mecca of british cycling that is National Cycling Centre. Home of British Cycling and Team Sky, the current generation of world beating British cyclists were formed and molded here, in the hard kilometres of training and countless hours spent on the boards lapping the track. The astute amongst you might be aware that the current generation of CUCC cyclists were not formed and molded on the boards, due to what I can only assume is an oversight by leadership of British Cycling to have not yet built a velodrome in or around Cambridge. Wholly inadequate as it was, 2 hours of track time at Derby would have to do. END_OF_DOCUMENT_TOKEN_TO_BE_REPLACED

​The last Sunday of October was the date of the first round of the KLMTB Revel Outdoors Winter XC Series, and we had a strong CUCC contingent of five riders head over to Thetford forest to race. The changing clocks (we eventually worked out) would allow us an extra hour in bed, which was a relief as we had been busy trying to obtain a bike for Arnav to race on well into the evening. Myself, Arnav Kapur, Sam Haigh and Toby Cowell rode the 1.5hr course format – Toby in the junior category – while Andy Zhao chose the slightly shorter 1hr race. END_OF_DOCUMENT_TOKEN_TO_BE_REPLACED